The San Francisco Mechanics clinched with a 2.5-1.5 victory over the Seattle Sluggers. There were quite a few interesting games, Zilberstein was likely losing his game for a while, but then got down into a 4v3 rook ending that really should have been lost, but gave drawing chances and honestly considering the situation with just 30 seconds per move he defended spectacularly for a draw. IM Bhat won a nice game to end IM Orlov's undefeated status in a very complicated game. On board 4 NM Shankland got revenge against the Slugger's Michael Lee in a Chinese Dragon. So what happened on board 1? Well, at a quick glance it would appear that Serper won fairly smoothly after getting a slight edge from the opening where he had a nagging endgame advantage. Well, it's kind of hard to agree with you when in fact, amazingly he was losing for one move. The following is the position after white's 29th move, he played Kc3-d4: 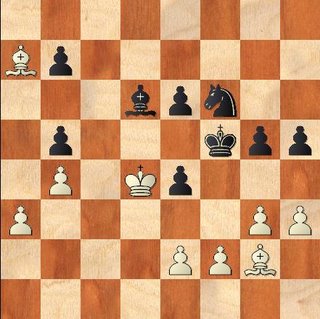 Position after 29. Kd4??
Here, believe it or not, black is completely winning with the move 29... b6!! it makes sense when you see that it's tactically justified, but it's really hard to believe such a move exists and in fact wins! Check out the variations below:

Instead in the game Friedel played 29... e5, certainly it's impossible to blame him for missing this move with a couple of minutes on his clock, but I can't imagine being white in this position, playing the reasonable looking Kd4 and suddenly seeing b6 on the board in utter shock to find out I was losing! An interesting missed opportunity. My congrats to the Mechanics on their victory and clinching a first week playoff bye and draw odds in the division championship. What a victory and what great Monday Night Chess, truly what Shahade was hoping for when he added this feature in season 2 of the US Chess League.
Posted by JG at Tuesday, October 24, 2006