There have already been a few games finished, most games are approaching time control so there should be a few more games done in the next 40 minutes or so.
Early "upsets":
Kaidanov - Kriventsov 1/2-1/2
Airapetian - Fedorowicz 1/2-1/2

Looks like Friedel worked his way through a minefield and now has 2 rooks for a queen and shouldn't do worse than draw here I don't know if he can live up to my prediction and win though. As for my other predictions looks like Sarkar might just be down a pawn, still a little unclear and I could be missing something, but my intuition tells me this isn't going well for him. Schneider - Kudrin is still to close to tell, it's not a particularly sharp position, but it could quickly become one. I probably won't make another update until the end of the round or early tomorrow. Hope you're enjoying these updates, should be some exciting games to analyze later.

[UPDATE!]
[Also now definitely looking like a win for Friedel in the following position] 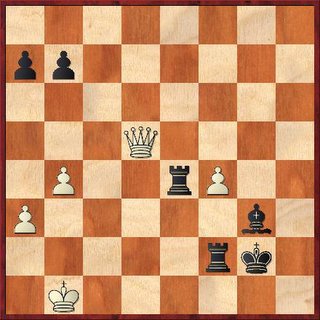