US Championship Round 2: Mid-round Update

There are definitely some interesting games early in round 2 and also some games that look like they're going to be draws as soon as that's allowed. First let's look at the following position from Friedel - De Firmian
White to move: 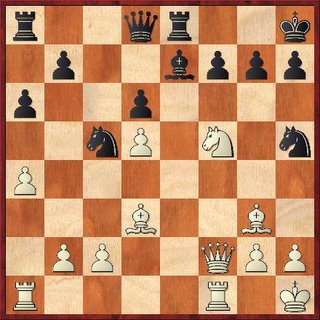 Seems Josh has a solid advantage here, his position is quite natural, hopefully my prediction will hold true there. I was right about the opening too, although that's not really fair since De Firmian basically ONLY plays the Najdorf and Friedel ONLY plays 6. f4 against it, but someone could have prepared something new. I'm going to say this game is somewhere between += and +/-, but not +- yet. (see bottom for explanation of annotations)

The next game that caught my eye was Schneider - Benjamin where it looks like GM Joel Benjamin is already near winning in this position
White to move: 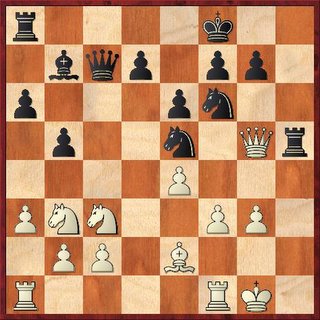 Looks like after Qd2 or Qe3 there is Nc4 and black will either take on g3 with check winning a pawn or take on b2 also winning a pawn. Kind of a weird game with black rushing up his h-pawn not worrying too much about his king in the center and just trying to activate his pieces with minimal development.

This might not be Nakamura's tournament, he already has the following position as black against Jake Kleiman: 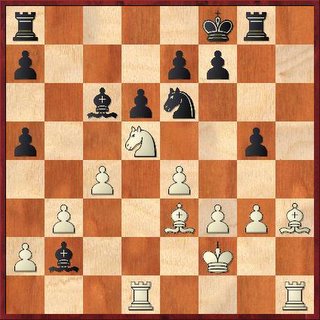 This position cannot be good for black. Don't worry about the doubled a-pawn, they're actually a common idea in this structure, they can be used to pry open some lines on the queenside, but white has much better central control and his pieces are clearly better. If the defending US Champion starts 0-2 it would be rather embarrassing for him, but this position while probably winning for white is not yet a forced win and Nakamura is a tough fighter, don't be surprised to see him turn things around. Either way, I'm always happy to see big upsets, they're inspiring for improving players like myself.