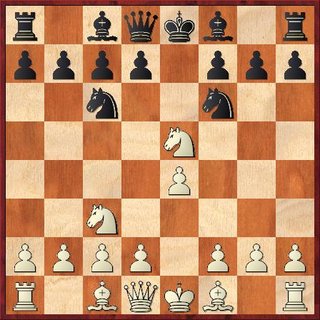 I decided to start my series with a gambit that unlike traditional gambits which sacrifice pawns, starts out by sacrificing a whole piece. I think this gambit is particularly confrontational even at an early stage which makes it kind of exciting. Probably most players will see it and compare it to a gambit that doesn't have really any merit like the "Fred gambit" after 1. e4 f5 2. ef g6, but I think white has some obvious compensation that is likely just inadequate. This I didn't feel like going into too much detail, but I did give a sample line just to give a feel. You can check that out here.
Posted by JG at Sunday, March 26, 2006

Josh is a tactical genius.

After my games today, I'll have to disagree.