US Championship Round 3: Blood Bath

Well round 3 is now well under way with some early results already in. There are definitely some games worth checking out. Larry Christiansen prepared a known sacrifice against Wojtkiewicz with some improvement and blew him apart in 23 moves a nice victory for him. Kreiman lost to a very strong effort from Tuvshintugs who will be among the women leaders if not the woman leader at the end of this round. Vigorito has the following position against Federowicz: 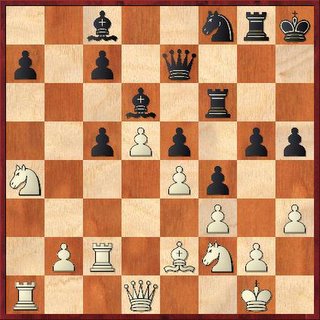 It's quite double-edged, looks like black's queenside is going to collapse, but the number one question in these king's indian positions is "will white get mated?" Good luck Dave.

On other boards it looks like Milman neutralized fairly easily against Shabalov, Shabalov might have some minor lasting edge, but it looks like black should have sufficient resources to draw. One of the games that most surprised me was Benjamin - Friedel when Friedel did not play his pet and instead went for the modern main lines which Bejamin then deviated from with the rather topical 9. d4 instead of playing the more "normal" 9. h3. The position now on board is somewhat of a mess typical of this variation. Good luck Josh, if you win I don't mind blowing my prediction. Other top board news De Firmian Ibragimov seems to go somewhat like what I predicted. The position on the board is somewhat typical of the French line De Firmian plays; I'm kind of interested in this line as I'm a French player myself.

Nakamura apparantly not happy playing his g-pawn up in strange positions in his first two game decided to pull a 180 and go for his b-pawn this game after 1. d4 d5 2. c4 e6 3. Nc3 c5 4. cd cd 5. Qa4 b5!?. Nakamura's having a tough tournament so I won't be too hard on him for playing this speculative gambit, he is playing down, but I really think it's strange that he doesn't believe he can outplay an opponent this much weaker than him playing more solidly. I guess solid chess doesn't win as many fans, but I don't have an particular admiration for unsound play, but I'm not entirely against it either, but I'm not sure if this is preparation or just trying to have some fun with unsound stuff. It seems he's trying to play sidelines to avoid preparation, but players at his level should welcome main lines and maybe deviate at move 14, not move 4. Anyways, that's my feeling on the issue, maybe I'm wrong, but I feel that Nakamura's play is on a very high level, I don't think that much of his talent comes from innovation; in fact, I believe this has cost him quite a few points recently. I hope you enjoy what's been coming up so far.