I think this is an interesting issue I don't appreciate often enough. Quite often I do endgame studies and tactical exercises. I find the latter quite easy and the former a bit more difficult. Tactical exercises have their own set of themes and endgame studies have their own set of themes, but tactics train real game situations whereas endgame studies are mostly just about calculation. I noticed in some of my games how easy it is when I have a strong positional bind to get confused while looking for tactics. For example, in the recent Amateur Team West tournament I arrived at the following position against a weak expert as black with my move: 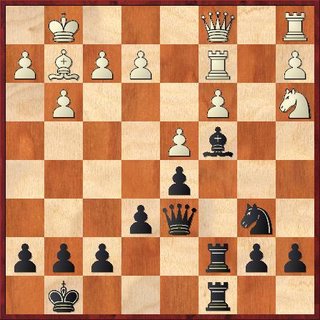 So my opponent just play Nb1-a3 which really should have signaled something. I was kind of annoyed by this move but not too worried as his hole on c4 was already giving me a nice positional edge. However, had I spotted 1...Bxe2! I would have had both a material edge and a positional advantage. This really shouldn't be that hard for me to spot and I can't come up with any reasonable excuse for not seeing it. The bottom line is I need to be more aware of knockouts like this since I quite often develop a positional advantage but if I don't see shots like this I might throw away half points sometimes. Fortunately in this game I went on to get the full point, not without allowing a little bit of complication on the board though.
Posted by JG at Tuesday, March 14, 2006