Pawn endgames occur pretty rarely in practice (2.87% of all games according to Fundamental Chess Endings by Müller and Lamprecht), however they are very important to study for two different reasons:

1) They are good positions to study to help to work on calculation (as I've heard from my coach and various other sources).
2) You might need to calculate them while making decisions as to whether or not the pawn endgame is good or at least okay in other endgames such as rook endgames (which occur in occur in 8.5% of all games) or rook + minor piece endgames (which occur in 15% of games).

Studying endgames is something I don't think I've done properly up until now. I think my judgment of such endgames is normally pretty good, but I find I have to work very hard while playing minor piece and pawn endgames. This is important as my play in complicated endgames and "queenless middlegames" is pretty good and I often rely on these as escapes when I start to get into trouble. So to start with I'm going to be working through Secrets of Pawn Endgames also by Müller and Lamprecht to both improve my pawn endgames and also work on my calculation. So as an introduction I decided to include a complicated position from one of my more recent tournaments where in the last round I was playing a friend and we reached the following position. White having just played b2-b3:
From Rocklin - Gutman 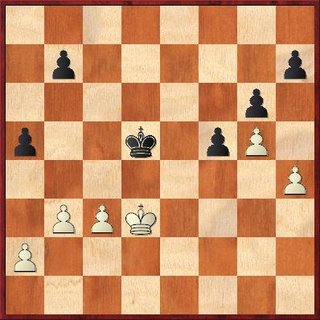 Black to move:
I'll leave this up for a day or two. Clearly black is better, but can he win this and if so, how?